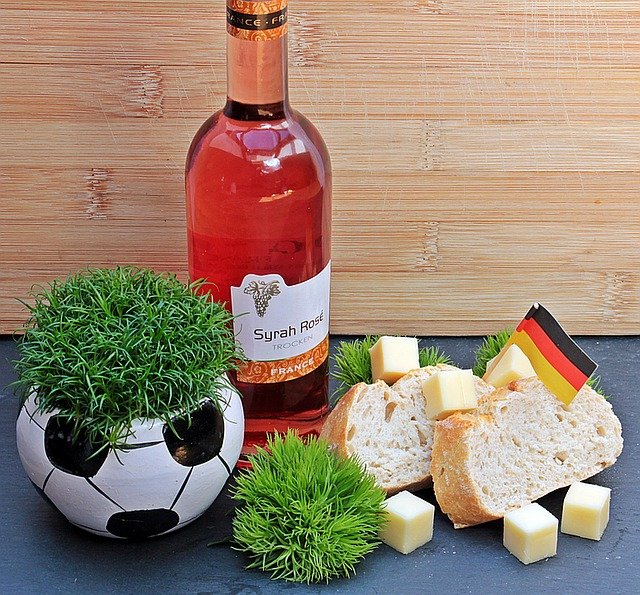 Some of the greatest footballers of all time come from wine-making regions, and they earn a lot of money from playing the sport. So it should come as no surprise that some of them have created their own wine brands. Adding their names to the brand makes it instantly recognizable to millions of football fans worldwide. Here are a few of the most well-known:

Andrea Pirlo Wine: Produced in his very own vineyard

This is the story of Andrea Pirlo’s love affair with wine. Whilst Italian veteran international Andrea Pirlo is known for his vintage performances in his deep-lying playmaker role, spraying out passes in rich variety, a lesser-known fact about him is his love of wind and wine production.

Pirlo grew up in Flero, near Brescia in the Lombardy region of Italy where his father ran a steel business. He grew up in a wine-loving family and would walk in the vineyards as a child. Pirlo started out playing for Brescia in the mid-90s and he’s stayed true to his roots by buying a vineyard in hills above the city.  The Pratum Coller vineyard (meaning ‘meadow hill’ in Latin) produces 15,000 to 20,000 bottles of wine each year. Currently making two varieties of red, a rose and a white, the vineyard is looking to expand its range and volume of production.

‘My grandmother had a vineyard here, and as a child I came with my relatives to help with the grape harvest,’ says Pirlo in a interview on his passion for wine which you can watch below.

‘I’ve always drunk wine, ever since I was little and my mother mixed a little of it with water for me. I like to read about wine, to understand it, to try wines from other regions, other labels.’

Like a growing number of wine loving footballers, Pirlo wants to spend more time working with wine after he retires. He aims to expand the vineyard and attract football and wine loving tourists to visit it.

‘Up until now we haven’t promoted the wine too much,’ he said. ‘We recently opened sales online, so little by little people are starting to know about it. Of course, some fans are curious to try it. But slowly we’ll try to promote it more.

‘We have also been renovating the farmhouse that forms part of the land here with a view to creating a restaurant and rooms for people to stay, somewhere they can come and relax in the midst of nature and also drink the wine.’

Andrés Iniesta is one of the greatest players in the world. Since 2009 he’s never been out of the annual FIFA world XI, was man of the match in the 2010 World Cup final and has won everything there is to win. He’s widely regarded as a model professional with years of hard work and dedication behind him. This includes largely abstaining from alcohol. That was, at least, until he spent a few million euros on a state of the art winery in near his home village and began to ‘fall hopelessly in love’ with wine.

Although Iniesta is unmistakeably associated with Barcelona (signed age 12, he’s played over 300 times for the Catalan giants) he’s actually from Fuentealbilla, in the province of Albacete, South-West Spain. It’s a region which has been producing wine longer way before Barcelona had a half-decent football team. Andrés’s Dad, José Antonio, bought a small 10 hectare vineyard (about 7 football pitches worth) in the 90s and set about cultivating the land. But thanks to Iniesta’s reported €8 million a year salary, the family have managed to buy a further 100 hectares, and whack a state of the art winery on the site to process native grape varieties such as Bobal, Macabeo and Graciano, together with Chardonnay, Petit Verdot and Sauvignon Blanc. They’ve taken inspiration from the back of their favourite son’s shirts and called the place Bodega Iniesta (the Iniesta Winery).

Iniesta said “This is not some celebrity pet project. In addition to the fact that my family has always dreamed of owning a bodega, football has given me so much that this is a way of giving a little something back to the place I was born. It’s a long-term project, which will continue long after I retire”.

Bodega Iniesta currently sells two wine ranges of Iniesta Wine. ‘Finca El Carril’ for refined, subtle palettes (think Barcelona under Guardiola) including a red, a white, and a white fermented in oak called ‘Valeria’ named after Iniesta’s daughter. The ‘Corazón Loco’ (Crazy Heart) range, has more powerful flavours (think chelsea under Mourinho) and is designed for less formal drinking. Currently the range is made up of a red, a white and a rosé.

There are no photos of the Barça player or football references on the bodega’s bottles. A Bodega Iniesta statement explains this is “because we don’t want his fame to be the reason why our wines sell. We want success to come from our wine’s intrinsic quality. And the same goes for pricing; you don’t to pay for the name, you pay for the wine”.

What do you get the couple who have everything? Their own vineyard of course.

David Beckham reportedly became something of a wine-buff during his spell as a Real Madrid player. When he moved to Los Angeles to play for the LA Galaxy David spent time in the vineyards and restaurants of the nearby Napa Valley. So when it came to thinking of a birthday present for wife Victoria, David naturally decided to spend a seven-figure sum on a Napa Valley winery of their very own!

Lionel Messi has an increasingly good claim to being the greatest footballer of all time. His accomplishments with Barcelona are unparalleled, where he continues to break every scoring record in European football. But at the international level, it’s a different story. Despite turning out consistently for the Argentinian national team since 2005, his relationship with the Argentinian people has been uneasy. Messi famously left Argentina as a 13 year old to join Barcelona’s academy, took dual Spanish/Argentinian citizenship and combined with the perception that he is yet to fulfill his potential at international level, some Argentinian fans disparagingly refer to him as ‘the catalan’ and tend to favor other national team players as their preferred talisman. It’s been a somewhat fumbling relationship on both sides – the story goes that the player’s first call up to an Argentinian national squad came via a letter addressed to ‘Lionel Mecci’.

All four wines are said to have been inspired by the “creative essence” of Messi. Presumably this doesn’t refer to the fact that you’ll think you can beat the Real Madrid defence single-handedly after drinking a bottle.

But over the last few years the world’s greatest number 10 has reached out to his compatriots. He began a charitable foundation (Foundation Leo Messi) which funds projects to aid healthcare and sports facilities for children in disadvantaged areas of Argentina. Messi has also patched things up with his boyhood club Newell’s Old Boys (who always maintained Barcelona robbed them of the boy-genius Messi) by funding a new gym and the construction of a dormitory inside the stadium to house youth players.

Now the self-styled national hero has decided to get involved with another Argentinian national passion – wine. A range called “LEO” has been produced by a winery near Messi’s hometown of Rosario in the Santa Fe province of Argentina. The wines are all made from classically Argentinian grapes: Malbec for the two reds and Torrontes for the white and sparkling wine. The white and one of the reds are young wines and feature a label shaped like a football shirt. A premium oak-aged malbec and a sparkling white have a ball-shaped label. All four wines are said to have been inspired by the “creative essence” of Messi. Presumably, this doesn’t refer to the fact that you’ll think you can beat the Real Madrid defense single-handedly after drinking a bottle. A proportion of the profits will laudably go to Messi’s charitable foundation.

Partly in thanks to his association to a drop of decent Malbec, Leo’s proclamation of stronger ties to his home nation seems to be working. Messi banners are now regularly waived at Newell’s Old Boys home games and most importantly of all Messi has the captaincy of the national team.

Not that he needs any more awards, but Messi can now also try and get the bragging rights for best FC Barcelona wine producer from Andres Iniesta, who has his very own winery.